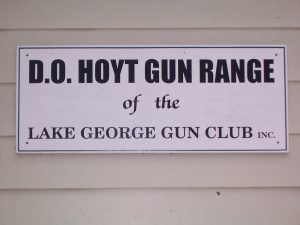 The property where the Lake George Gun Club is located was purchased by Dolorous Hoyt in 1961. Dolorous, who was a gunsmith needed a place to sight in rifles. He began in 1962 by moving a camp (formerly the security building at U.N.B.) in sections to the property and reassembled it.

Dolorous and some friends then made a backstop by putting some poles between two trees, piling sand on top and facing it with sawdust.

A shooting bench was placed approximately where the clubhouse is now. Another bench was placed in the island between the two driveways for 100 yard shooting. This allowed Dolorous, family and friends to sight in hunting rifles and for Dolorous to check firearms for his customers as well to check his hand loaded ammunition. This setup was used until the 1970s when legislation mandated that shooting must be carried out at an organized gun club shooting range.

With the help of Ken Rickard and a bulldozer and others with chainsaws, an area of the field was cleared and the pulp sold to enable the building of a much larger 50 yard backstop.

After the flood of 1973 Dolorous moved the metal target shed out and it was placed where the clubhouse now stands. It was his former motorcycle shed. A window opening was put in the side. This gave a covered firing point. A metal shooting bench with planks was constructed and sat beside the covered firing point. It now sits at the 25 yard line.

Later the clubhouse was constructed under the supervision of Charlie Byno and the former motorcycle shed became the target shed. The next year Ed Chapman, Roy Drummond, Dolorous,Jim Coe and others began clearing the parking lot. The Donnelly’s then levelled the parking lot area. The Lake George Gun Club was officially formed in 1979.

One of our members, Jim Baker, operated Gorman Construction. With his equipment and labour from others more pulp was cleared and sold and the 100 yard backstop was constructed. An official shooting schedule came about because government directed that an active shooting club must have one. The sign in book also came into use at that time. The club became incorporated in 1983. With incorporation came the legal responsibility to protect offices and members. Insurance was now a necessity so the club became affiliated with the Royal New Brunswick Rifle Association.